Home » Can musical soundtrack really have an impact on Gambling?

Can musical soundtrack really have an impact on Gambling?

Music is a highly influential medium both to our brain and emotions. Nobody can deny the fact of being affected by the type of music playing in the head when it comes to mood. A musical piece with no lyrics can also convey emotions, sometimes even better than a lyrical song. 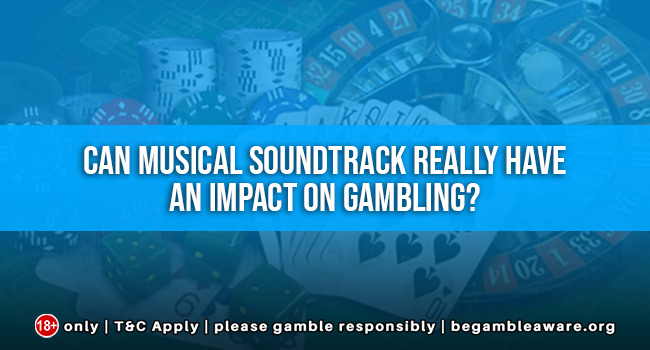 The power of music is beyond any geographical boundary or linguistic barrier. The casinos were to be no exception to the unconfinable impact of music. The casinos soon realised this influential ability of music and started to captivate it to their own use. Online gambling sites and land-based casinos, both adopted the trend of playing background music while the customer enjoyed the casino games. The online gambling sites brought music into use by playing suitable background music at the casino studios from where the live casino games were being streamed.

Researches done on human behaviour affirm the chances of musical influence in normal life situations. A fast pace hard-hitting song makes people groove even if they don’t want to. A piece of slow or rather sorrowful music takes the person into deep thinking and sometimes even makes him cry.

Unaware of the impact

Music has the ability to create a certain atmosphere, and here is where the casinos strike their hammer. The casinos create a specific ambience with the help of certain music genres around the players that may incept the idea of relaxing and playing longer.

The players don’t realize this impact of music on the human psyche but are influenced by it at almost every moment. Not just the casinos, there is music playing at the background of most public or private places like a doctor’s waiting room, hotel’s reception, lobbies and lounges or even in the elevator.

Impact of music on gambling behaviour

Effect of music in the real-life situation needed no evidence. So researches were conducted to see if the effect was actually viable in gambling. The result of these researches gave impressive results and added another ‘yes’ to the evident impact of music.

Effect of high-tempo and punchy music at the table

Studies showed that the fast-tempo or punchy music played in the casinos brought significant changes in gambling behaviour. The players who listened to faster-paced music started placing their bets at a rapid pace. The speed of betting was noticeably increased and this made the casinos realise that playing high-tempo or fast music can make players place more bet in a relatively lesser time than they would generally take. More bets in less time meant higher house edge for the casinos.

Effect of low-tempo music at the table

The results of high-tempo music at the table were very impressive but the effect of slow-tempo music was a bit different from what was expected. Players at the table who listened to slow music were also placing more bets. The reason and procedure behind this result were however different from what the high-tempo study showed. The bets were not being placed quickly but the slow music allowed the players to indulge themselves into the game deeply. This resulted in longer gaming hours and more number of bets being placed by the players.

Effect of smooth and slow music at the casino

After rapid hours of gambling, the players usually try to find a place to be comfortable. Smooth and soft music in such areas made the players feel at ease and relax. With a relaxed and fresh mind, the players ended up devoting more hours to the casino.

Music is one of the greatest mediums of bringing change in the world. The impact of music on the lives of everyone is undeniable. Gambling behaviour stands as no exception to its influence.