Home » The contribution of VR towards Gambling Addiction

The contribution of VR towards Gambling Addiction

Many of us did not know of the existence of VR until a few years ago, although it was invented way back in the late 1960s. In the past, people had mixed reactions towards this new technology, some calling it the ‘technology of the future’, and others mocking about it. But that was in the past when the technology wasn’t the most advanced and convenient for the users. The VR quality of the modern-day has significantly improved and are profoundly advanced. Now, people utilise it for communication, entertainment, training, and many more. But even in the present day, there is a disparity on people’s perspective on this particular innovation.

In the gambling world, the addition of the VR feature is highly anticipated by enthusiastic players. In fact, some online casinos are already offering this feature. The coming of the VR technology into the gambling world has set a new level of gaming experience for the players, offering a wide range of its uses for different purposes. As a matter of fact, a research team even went out all the way to claim that VR can be used to treat gambling addictions. Here’s how the VR technology is contributing towards the gambling addiction. 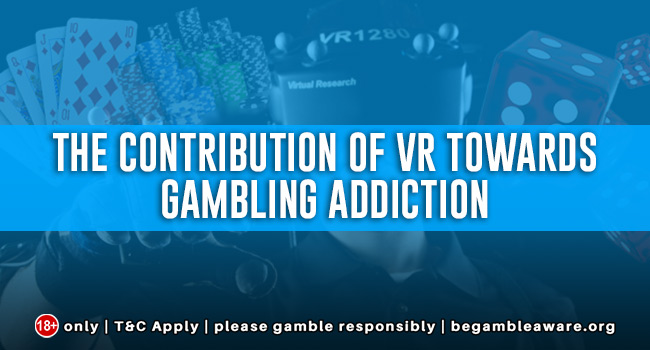 The evolution of Virtual Reality

If we think about the present hype of the VR technology, it’s hard to imagine the design and how it looked like when it was initially launched. The VR world was considered a joke by many, considering the thick headgear and programs that didn’t give out any realistic vibe. It was just a chunk of an object to online and mobile gamers. If we compare the present updated features and design to the first product, it is far from even being close to Virtual Reality. However, the new world of VR came in 2010, when Palmer Luckey, an entrepreneur from the United States, created the very first kind of prototype, which is now known as the Oculus Rift. The prototype brought a whole new generation to the gaming world, bringing revolution to the online gaming market.

How does VR help in gambling addiction therapy?

According to the research team who have been studying VR for the past two decades, the team has developed a program to help problem gamblers to face and overcome their addiction. Their research has shown positive results so far, with a success rate of around 60%. Addiction therapy is given based on the principles of cognitive behaviour therapy (CBT), which is a method of action-based psychotherapy. It helps access the gambler’s emotions and thought patterns without actually being present at a real casino site, followed by a few questions and discussions. However, some gamblers fail to follow the therapy procedures without being present at the real casino, and at the same time, it becomes a risk to take them to the actual site. This is when the VR comes into use. Putting on the VR goggles will put the gambler at a realistic casino set up, and in turn, make the therapy session more natural and practical.

What the future holds for VR technology?

As technologies keep evolving each year, we cannot give a solid answer to how far people are willing to go or take advantage of the VR. So far, VR has significantly played important roles and helped people overcome their addictions and disorders apart from gambling problems. And the success rate in using VR to treat anxiety disorders is about 80-85%, which is a great deal of achievement. Apart from this, Virtual Reality is already in the process of treating other serious issues like schizophrenia, eating disorders, and even victims of rape and PTSD. If VR delivers the expected result to such problems, and if it could play a key role in gambling addiction therapy, then, VR is definitely worth a try.